After a really long break, as it’s been almost two years without a new article (thank you life for keeping me busy as hell), We’re continuing the journey inside the Kriollatino language.

As reminded by the very first articl from a while ago, every monosyllabic root contains a long vowel.

If it is voiceless, then the rest of the cluster is voiceless, thus we’ll never meet monosyllabic roots like “bse”, “epd”, “gpedk” or things alike but rather “pse”, “ept”, “ped”.

So now let’s give you something that can allow you to introduce yourself using this language.

What is your name?: Nómo de tu ése lo kwe?

Where do you live?: Tu víve en kwo?

So if we put all this in perspective, it looks like this:

As we’ll make most articles in written form, it is crucial as much as convenient to have a writing system to agree upon. 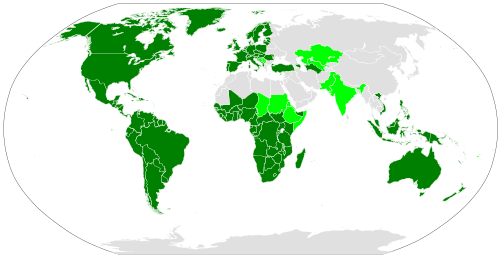 A sizeable part of humanity grew up using the Latin alphabet, dispatched on the five  continents: West, and Central Europe, Oceania, America and 2/3 of Africa (cf. map)

Even if it has no official use in countries like Russia, China, Japan, Korea, Arab countries and other oones that use a custom alphabet (Ethiopia and Greece, for examples), Latin script is still used in these countries to help visitors.

We’ll use Latin script which is the most used writing system in the world, and also the widespread. Other scripts can still fit for Kriollatino, (I’ll demonstrate this later, in another post), but for the convenience of everyone, all words, sentences, etc. will be written in the aboco.

Á/á (á) is a longer a and pronounced twice as long as A/a.

B/b (bo) is like the English b. noting new here.

C/c (co) stands for “ts” sound like in “brats“. It is pronounced “ts” wherever it is within the word.

Ł/ł is a bit special. It is pronounced “y” like in “yack”

Ó/ó is a longer version of the previous vowel.

R/r has no equivalent in English, however it has the same sound as the Spanish “r”.

S/s is same as English.

V/v, W/w are pronounced the same as in English.

They are ordered: AÁBCĆDĐEÉÊFGHIÍJKLŁMNOÓPRSŚTUÚVWXYZ, which is 35 letters, for 35 phonemes. in comparison, English uses 26 letters to transcribe a phonetic system made of 13 vowels, 8 diphtongs and 25 consonants.

Q/q is not part of the Kriollatino alphabet, it can however be present in loanwords. In this case, it is pronounced “k” like in “kayak”.

Here are some words

Here are some words to begin pronounciating Kriollatino the right way:

This blog will be about a home-made constructed language. Intended for everyday use, actually for anything you see fit. Personally, I made it to structure my thought and describe the world to myself in a more analytical way… with a relatively reduced set of words.

Malagasy, my mother tongue has a serious lack of modern scientific vocabulary, and French and English have an oversized vocabulary, full of loanwords of obscure origins (for people who’ve not studied literature… or not studied anything at all). Compound words using native words of the latter two are long and complicated. Malagasy can palliate this, but resulting words are very, very long, and not truncable (e.g. Malagasy haikoriam-boanaratra stands for electronics, but IRL no one actually uses it, and prefer elektrônika instead).

This is why I’ve decided to create Kriollatino.

Inspired in the first place by Spanish language, then by Esperanto. This language is yet another attempt to construct a neutral language. A language far enough to pass over cultural barrier, but not too far to look “Volapükish” and die out because of difficulty.

Kriollatino is not intended to be a highly inflected language. It has basic inflections for verbs (three tenses, two voices) and nouns (determined and undetermined, singulars and plurals). Adjectives, adverbs are uninflected. Prefixes, suffixes and particles act as “tool words”. Roots which are used to form nouns, verbs, adverbs and adjectives. If they are monosyllabic, their vowel is a long one (indicated by an acute accent).